As we envision the future of the Evangelical Congregational Church, it is important to look to our past and celebrate the “streams of influence” that have shaped and molded our church. Richard Foster’s book, Streams of Living Water: Celebrating the Great Traditions of Christian Faith, was the inspiration for this view of E.C. history. The people and events of the last 200 years support this view.

The Evangelical Congregational Church has been shaped and molded by four great streams of influence. 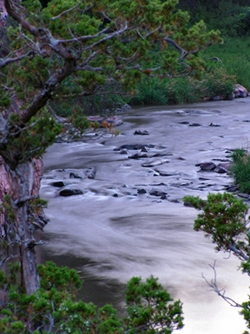 First, there is the stream of evangelism.

In 1785, Jacob and Catharine Albright married and established their home at Fry’s Mill near Hahnstown, Lancaster County, Pennsylvania. They affiliated with the nearby Bergstrasse Lutheran Church and occasionally had contact with itinerant Reformed Church evangelists, Revs. William Otterbein and Anthony Houtz. In 1790, several of Albright’s children died of dysentery and he and Mrs. Albright asked Rev. Houtz to preach the funeral sermons. Albright was deeply affected by Houtz’s evangelistic preaching and eventually surrendered his life to Christ. Jacob Albright was born again by faith in Jesus Christ alone!
Albright grew in the grace and knowledge of Jesus Christ as he faithfully studied God’s Word and developed his prayer life. In 1796, Albright yielded to God’s call to ministry. He writes “I began my travels in the year 1796 in the month of October in order to obey the call of God in proclaiming his holy will as revealed in the Gospel.” (Albright, Raymond W. A History of the Evangelical Church, p. 43) Many homes were opened to Albright as “preaching places” and Albright boldly preached the Gospel. By 1800, Albright had formed three classes (small groups of believers engaged in Bible study, prayer and spiritual accountability) with approximately 20 believers. By 1803, the number had grown to five classes with 40 believers. Men and women, even entire households, had been brought to faith in Christ under the preaching and oversight of Albright.
The newly organized church, the Evangelical Association, grew as preachers were sent to cities and villages to preach the Gospel. The early growth of our church was directly related to the evangelistic fervor of our preachers and lay leaders. By 1875, the Evangelical Association had more than 95,000 members. By 1891, the number of church members had grown to 150,000. God was honoring the evangelistic endeavors of the church, endeavors that reached beyond the shores of the United States into the countries of Japan, Germany and Switzerland. We were true to our name! We were EVANGELICALS!

The second stream of influence is the stream of pietism.

After Albright trusted in Christ for his salvation, he had a hunger for God’s Word and a desire to obey God’s will. He forsook the religious formality with which he had been familiar and sought after personal piety or an ever-deepening devotion to the Lord nurtured by the disciplines of the Christian faith. God met Albright’s spiritual needs by providing mentors who lived a short distance from Albright’s home.
Everyday, Albright went to the home of Adam Reigel, a lay preacher of the Church of the United Brethren in Christ, for instruction in the Christian faith. Feeling the need for a “church relationship,” Albright joined a Methodist class that was led by his neighbor, Isaac Davies. Jacob Albright devoted himself to prayer and fasting. He daily studied the Bible and he became accountable to Christian brothers for “the condition of his soul.”
Personal piety marked the development of our church as well. Albright chose the Methodist class structure as the organizational structure of the Evangelical Association. From its beginning, our church tradition has emphasized the necessity of a growing devotion to Christ as evidenced by prayer, Bible study and spiritual accountability. These class meetings eventually became prayer meetings. Today, they are called “small groups” or “cell groups.”

The third stream of influence is the stream of holiness.

Albright’s close association with Methodism brought the doctrine of Christian perfection or holiness to our church. This doctrine has had a prominent place in the church’s Discipline where it is still described as “one of the cherished doctrines of the Evangelical Congregational Church.”
Our church affirms that “entire sanctification, or Christian perfection, is a state of righteousness and true holiness, which every regenerate believer may attain. It consists in being cleansed from all sin, loving God with all the heart, soul, mind, and strength, and loving our neighbor as ourselves. This gracious state of perfect love is attainable in this life by faith, both gradually and instantaneously, and should be earnestly sought by every child of God; but it does not deliver us from the infirmities, ignorance and mistakes which are common to man.” (Discipline, Article of Faith 111)
The preaching and teaching of this doctrine received renewed emphasis with the founding of the National Camp Meeting Association for the Promotion of Holiness. The first such holiness camp meeting was held at Vineland, New Jersey in 1867. In 1868, the holiness camp meeting was held in Manheim, Pennsylvania and 25,000 people attended including 300 ministers. Many ministers and laity of the Evangelical Association were in attendance thus accounting for the renewed emphasis of the doctrine in our churches. The Manheim camp meeting also fostered the growth of the campmeeting movement in our church.

The fourth stream of influence is the stream of congregationalism.

The year was 1887. The setting was the General Conference of the Evangelical Association. The issues were many and personalities played a prominent role but the “straw that broke the camel’s back” was one man’s refusal to follow another man’s directive. Bishop J. J. Esher wrote an article criticizing the Japan mission. Rev. H. B. Hartzler, editor of the church’s magazine, refused to print the article. Esher responded by bringing Hartzler to church trial “for unchristian conduct, official misconduct and grievous offense as minister and as editor of our church.” The trial consumed 11 days of the 27 day conference. Hartzler was found guilty by a vote of 57 to 47. This vote was by ministers only. No lay delegates were present at the General Conference.
The stage was set for division in the church. Pastors and laity either identified with the majority, commonly called “The Esherites,” or the minority, commonly called “The Dubsites” (so named for Bishop Rudolf Dubs, the leader of the minority party). In 1891, both parties called for General Conference. “The Esherites” met in Indianapolis while “The Dubsites” met in Philadelphia. The authority of the majority party prevailed and the ministers and congregations that supported the minority party were excluded from the denomination. These congregations lost their church buildings since the buildings were owned by the denomination. Efforts to reconcile the parties failed and, by 1894, the minority party had reorganized into a new denomination, the United Evangelical Church.
This new denomination emphasized congregationalism as they reacted to the abuses of power they experienced in the Evangelical Association. The powers of the bishops and General Conference were restricted and the ownership of the property was placed in the control of the local congregation. Every local church would elect a lay delegate to the Annual Conference and there would be an equal representation of lay and ministerial delegates to the General Conference. The United Evangelical Church lost little time in launching aggressive evangelistic projects including foreign mission outreach. The original intent of congregationalism was to empower the laity for ministry and protect the local church from the control of a denomination that has “lost its way” – in doctrine and polity.

These streams of influence have shaped and molded the Evangelical Congregational Church so as to position us for effective and healthy ministry in the 21st century.

If you carefully examine the most popular books and seminars in the American church today, you will find that the themes are evangelism, piety and holiness. Our church tradition was founded upon the premise that we ought to be “seeker sensitive.” We joined the Methodists in establishing the first and most extensive networks of small groups our nation has ever known. “Experiencing God” was the intent of our class meetings and prayer meetings as well as the protracted meetings for revival that were so prevalent in our churches. At a recent NAE convention, David Mains (Chapel of the Air) and Paul Cedar (Mission America/Lighthouse Movement) identified holiness as the crying need of the American church if we are to experience an awakening and revival. Holiness of heart and life is a cherished doctrine of our church.
Finally, what local church would not warmly embrace a congregationalism that empowers the laity and enables the congregation to withdraw from a denomination that grows increasingly liberal, even apostate. Congregationalism was never meant to make a church’s property its first priority and the trustees its most powerful leaders. Congregationalism was intended to free a church to aggressively evangelize and effectively minister to its community.
I am convinced that the rich heritage of the Evangelical Congregational Church positions us for healthy ministry in the 21st century. We have everything we need to minister to this generation. Will we accept the opportunities that God places before us? Will we be a church marked by evangelistic fervor, personal piety, and holy living? Those are the questions that require an answer – from you and from me.